Tired of taking painkillers for headaches?. This article will explain what is Migraine? Causes of Migraine? and what is the best homeopathic treatment for Migraine.

A migraine is a throbbing headache that just seems to set in apparently due to no reason at all. Numerous reasons for migraines are primarily vascular. That implies that certain changes in the blood vessels that provide blood to the brain trigger the pain. Obviously, the causes to get the changes in the blood vessels might vary from one person to another however this is usually how it starts. Migraines are easily the most typical headache syndrome. It affects 10 to 15 percent of the global population. One peculiar feature of a migraine is that it usually begins in childhood or adolescence and is most common in young and middle-aged adults.
The only good thing about a migraine is that it usually stops as people get older. Migraines have absolutely nothing to do with a person's background, upbring, or social class. Migraines don't discriminate. Migraines have a strong impact on the quality of life of a person. It affects not only the person but additionally the lives of people who moves in close contact with the person. Migraine attacks can sometimes be so severe that an individual can have to abandon her or his routine activities for 3 or 4 days at a stretch. After the pain of a migraine sets in, it's sheer agony.
It's nearly as if one side of your head is being ripped off. There's little an individual may do to stop this pain. The good thing about a migraine is that it's transient, that's the pain will go away after some time. This usually occurs after the person gets a couple of hours of sound sleep. However, the worst thing about migraines is they recur. But migraines also can be prevented to a very large extent as the tips below explain. There are basically two kinds of migraine, the classic migraine, and the common migraine. The classic and the common kind can occur as frequently as several times a week or as infrequently as once every few years.
Both types can happen at any moment. But for many people at least, it's possible to predict the occurrence of the migraine. For instance, there's a greater tendency for a migraine close to the days of menstruation or every Saturday morning following a stressful week of work. Even though lots of sufferers have a family history of migraines, the exact hereditary nature of this condition isn't known. Individuals who get migraines are believed to have an inherited abnormality in the regulation of blood vessels.
The following factors frequently act as triggers that set of the migraine. Stress is among the major factors that may contribute to the beginning of a migraine. 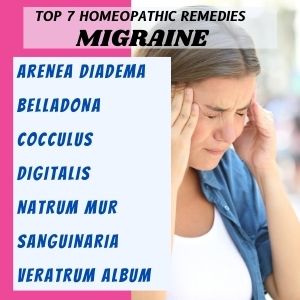 Some patients owing to a poor immune system are easily susceptible to bacteria, viruses and other allergens. In such individuals even a mildest irritation caused by these allergens evoke an exaggerated response by the body. Homoeopathy helps by building the immune response of the patients so that the body is effortlessly capable of fighting of the slightest infections.