What is Allergic Rhinitis?

Allergic rhinitis results from an allergic response to a substance, like dust, pollen, and even certain animal fur. When your immune system is overly sensitive, it will react strongly to allergenic substances, causing antibodies to be produced to fight them off. These substances often cause cells to produce a variety of chemicals in your body, which include histamine, which can cause your inner layer of the mucous membrane to become inflamed. This inflammation then can progress to all forms of swelling, from mild to severe.
Hay fever is an example of what happens in allergic rhinitis.
Allergic rhinitis causes what is commonly called a postnasal drip since it often comes from inside the nose rather than outside it, this may eventually cause a sore throat. Inhaling deeply during a Hay Fever attack can result in nausea and vomiting, but if the attack is due to an allergen or a substance that the body is trying to escape, then the effects can be much more serious.

Signs and Symptoms of Allergic Rhinitis

Common symptoms of allergic rhinitis
Sometimes the person may not have much of a cough at all or may wheeze with every movement they make. The majority of people suffering from allergic rhinitis have a postnasal drip, however if the drop is due to an airborne allergen (such as pollen from grass and trees, or dust from cleaning chemicals) then there may be additional symptoms such as a stuffy nose and difficulty breathing. 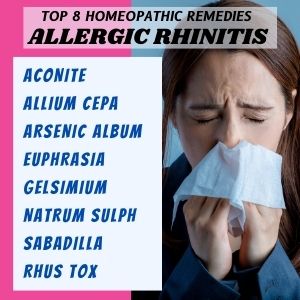 Some patients owing to a poor immune system are easily susceptible to bacteria, viruses and other allergens. In such individuals even the mildest irritation caused by these allergens evoke an exaggerated response by the body. Homoeopathic medicine for allergic rhinitis helps by building the immune response of the patients so that the body is effortlessly capable of fighting of the slightest infections.