Case study of Successful Treatment of Primary Hypothyroidism by Homeopathy

Mrs. S. J, a 53-year-old female presented with complaints of severe body ache and fatigue due to Hypothyroidism since 2002. Chronic bronchitis since 2003 resulting in severe breathlessness, just walking from reception till cabin of Doctor she was totally out of breath.

She had tremendous weight gain, she gained weight from 80 kg to 97.8 kgs in spite of taking her thyroxin medicines regularly. Started with 25 mg since 2003 went up to 75mg/day of Thyronorm and despite taking medicines her complaints were not better. She began treatment in April 2009 at HomoeoCare.

Her chronic bronchitis had become much better, she now walks without breathlessness and discomfort. Her mealtime has become pleasurable for her, she eats without fear of vomiting and no gulps of water required to push the food down. Her lethargy and dullness have gone. Her TSH has started to come down from 5.14 to 4.40. Gradually her body’s own T3, T4 secretion started and T3, T4 started coming in normal range. Body stroked a balance and all three hormones T3, T4, TSH became normal. TSH came down to 1.03. She lost weight and was 93 kgs on the closure of treatment. Earlier she could not sit even to watch T.V. and now she was playing games on Laptop. 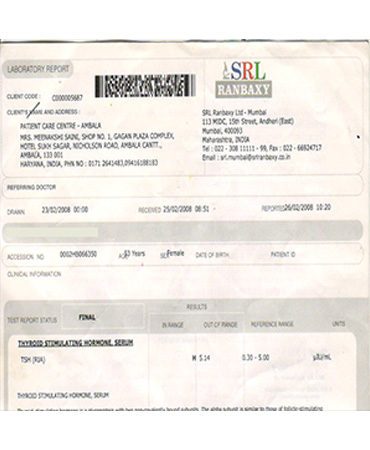 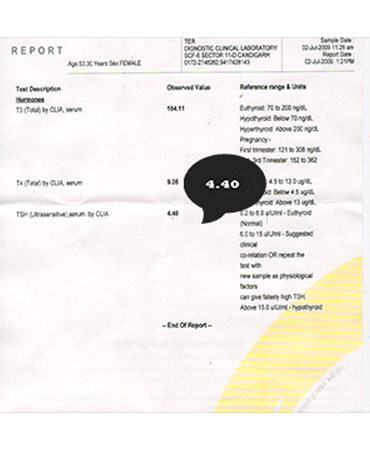 Ultimately “Impossible turned possible with Homoeopathy. Thyroid got Cured with Homoeopathy at the best clinic in the world at “HomoeoCARE".She is off all medications and is doing well. She weighed 93 kgs at end of treatment i.e. lost 4.8 kgs with no extra effort!!! She feels more energetic, she is able to eat, breathe and sleep well because of Homoeopathy.