Case study of Successful Treatment of Hypothyroidism by Homeopathy

Mrs. P, a 30 year old female suffering from hypothyroidism with hoarseness of voice, weight gain, lethargy and weak memory since 2007, started with the homeopathic treatment at HomoeoCARE in April 2009.

Her thyroid profile on 4-07-07 was T3-0.6, T4-3.8, TSH- 8.5. Even after taking Thyronorm 75mg/day her T.F.T was T3-0.80, T4-11.11, TSH 1.24.T3, T4 secreted by thyroid were less, showing that thyroid gland was going into failure. Whereas high TSH levels indicate that pituitary had to force the thyroid gland to secrete the hormones. This patient was also suffering from a Migraine and weak memory since past 3 yrs. She was on Thyronorm 75 mg once/day and used to take painkillers for her migraine.

After being treated at HomoeoCARE her lethargy reduced, her memory started improving, her migraine improved so much that she never took any painkillers since she started with our homeopathic treatment. Usually, Thyronorm/Eltroxin is never tapered off or stopped permanently in patients with hypothyroidism in Allopathy but this patient was put off thyronorm within 3 months of her treatment at HomoeoCARE.Her T3, T4 levels started to improve as her thyroid gland started functioning again and her TSH became normal. Ever since April 2009 she is on no thyronorm / hormonal pills and living a healthy and active life without being dependent on thyronorm for the rest of her life. Her subsequent T.F.T in July 20o9, Sept 2009, Jan 2010 are as follows. Homeopathy cures and at HomoeoCARE, your guide and doctor will interact with you and based on your symptom will prescribe the required tailor-made medicine and help you get rid of your thyroid disorder. 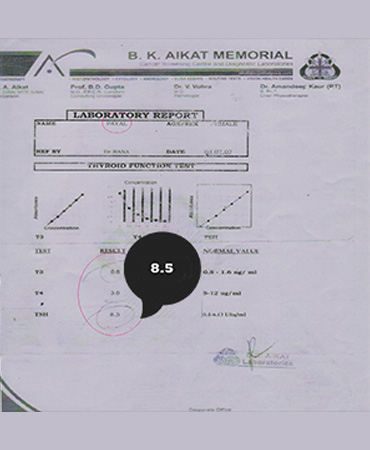 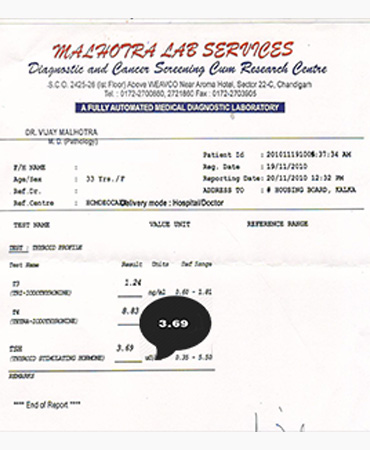