Case study of Successful Treatment of Psoriasis by Homeopathy

Mr. Y. B. 33-year-old male from Matunga was suffering from Psoriasis. Psoriatic patch first appeared on the neck then gradually involved other parts of the body except for the face. He was very disturbed due to severe itching and scaling of the skin. He applied a lot of ointments to get relief but there was a continuous progression of disease involving more and more parts.

What is Psoriasis, its causes, and Treatment

Psoriasis is an autoimmune, noncontagious, chronic skin condition that produces plaques of thickened, scaling skin. Risk factors for psoriasis are many including genetic predisposition, environmental triggers, certain medications, and stress. A common treatment for psoriasis includes steroid creams, light therapy, and oral medications, such as biologics.

In Psoriasis, there are dry flakes of skin that scale results from the excessively rapid proliferation of skin cells. It is not unusual for psoriasis to spontaneously clear for years and stay in remission. By applying creams, taking steroid injections is only meant to remove the disease, not the cause which leads to recurrence of psoriasis. Homeopathic medicines help to control the progression of psoriasis and prevent any recurrence and improve the general health of the individual.

Psoriasis is an autoimmune disease. Normally skin cells multiply by 1:2 and daily throws out the dead cells but when the internal mechanism is triggered it leads to the multiplication of cells by 1:20 which becomes visible to the eye. Psoriasis is mainly caused by stress. Homeopathic medicine helps in removing the cause and triggering factor and reverses skin multiplication back to 1:2.  The patient started Homeopathic medicines and within a month scaling stopped and no new patch appeared. Within 6 months all the patches disappeared, scaling was nil and itching was minimal. There are thousands of cases of Psoriasis being successfully treated with homeopathic medicines at the world’s best homeopathic clinic, HomoeoCARE. A few of them are mentioned below:

Another Case of Psoriasis in 21 years old female

Miss S. P, a 21-year-old T.Y. B. com student residing at Sewri was suffering from Psoriasis for 8 years. She first developed a psoriatic patch with itching and white flakes on the scalp. And since 3 months psoriasis had spread to both her legs.

Since she started homeopathic medicines for psoriasis no new psoriatic patch developed. Within 2months scaling and itching reduced significantly. In the next few months, all the patches disappeared.

Another Case of Psoriasis in a 29-year-old female

Miss T.J, a beautician staying at Wadala came to HomoeoCARE with complaints of itching with scaly patches all over the body for 16 years. She was diagnosed with Psoriasis. First, it appeared on the scalp then a few patches on the hands, legs, and back. She got temporary relief from allopathic medicines but then it reappeared. 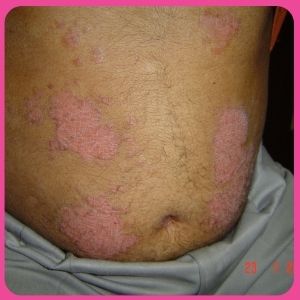 Don't hide your skin beneath your clothes. Take a Positive approach with the best homeopathic treatment for psoriasis at HomoeoCARE. Seeing is believing. Experience the world's #1 homeopathic clinic in Mumbai.