Case study of Successful Treatment of Hashimotos Thyroiditis by Homeopathy

Hashimoto's thyroiditis also called as Autoimmune Thyroiditis is a thyroid disease in which the immune response from your own body destroys the thyroid gland. It means that your body defence system which was supposed to protect you from outside attack turns against you and starts attacking your own cells. The autoimmune response is triggered by a combination of genetic and environmental factors. Instead of attacking foreign substances such as toxins or proteins from bacteria and viruses, these antibodies inappropriately attack thyroid proteins. Antibodies that attack the body's own proteins are called auto-antibodies. The presence of auto-antibodies to thyroid peroxidase is an indication of autoimmune thyroid disease.

How can Homeopathy help in Hashimoto's Thyroiditis?
The basic principle of homeopathic medicines is to improve the immune system of an individual. In cases of autoimmune diseases, where the immune system had wrongly identified its own thyroid cells as foreign cells and started attacking it and destroying it, the homeopathic medicines reverse this faulty trigger mechanism, and stops the attack on thyroid cells, thus reversing the disease. 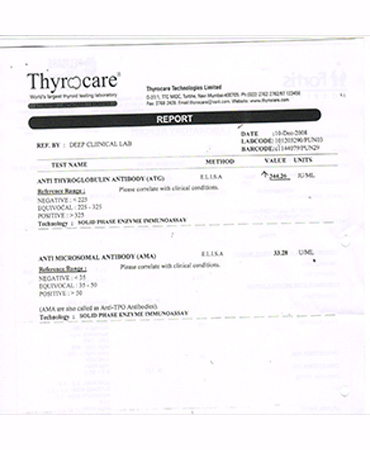 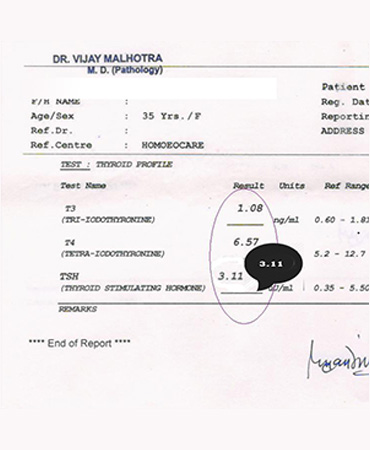 She began homeopathic treatment for Hashimoto's Thyroiditis in 2009 at HomoeoCARE and her first thyroid profile post-treatment revealed that Anti-TPO had come down from 11721. 6 to 14. A feat unbelievable for Allopathy as they never monitor Anti-TPO since their medicines cannot affect Anti-TPO.Anti-TPO turning normal means the destructive processes have stopped and hence now thyroid gland can construct(synthesize) thyroid hormones.